I have been MIA in the blogging world for so long that coming back has been such a challenge. Until now I am not sure if I should - not really knowing what to share with my few readers anymore. I have been browsing thru my previous posts and really saw that my blog did not carry a distinct direction. Is it a fashion blog - a diary of a start-up stylist with the mix of behind-the-scenes chronicles of shoots and fashion shows? Is it just a measly excuse to show everyone what I am wearing for the day with awkward poses of an uncomfortable model of sorts? Or in rare occasions, is it a glimpse of the young struggling mom that I am to my 5 year old son who is more of a friend than an offspring? It has been a jumble just like how I am really.

This post will not serve as a guide to the future direction this blog will take. I have not yet decided on that. It really is just a form of catching up with what I have been up to. And honestly I just had the sudden urge to write at the same time unlock the privacy setting of my Instagram. I think I am done being a hermit. I am ready to join the world again.

So to let everyone who cares to read know...

I was put in bed rest as early as my 3rd month, before that it was actually self-imposed. So it wasn't just good-bye to wearing the sky-high heels and platforms (was actually even thinking on how to make preggy outfits chic) but also good-bye to the (fashion) world and the family that I have become so happy to belong in. I actually thought this is it. I am quite settled. I actually found where I should be. But again God has intended something different for me. Where as my peers were building their careers I am growing a family. 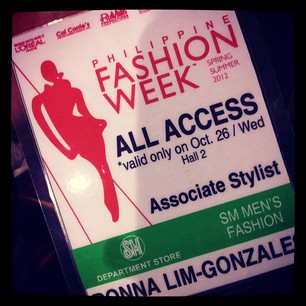 I laid in bed on my wits end until it was time for me to give birth. Gaaah how my mind tortured me with things that I cannot do anymore or plans that I cannot even put into action! I was so mad at myself for always being maselan (delicate) during my pregnancies. I was so determined to keep working this time around - I know women who have. Marami naman ganoon yung circumstance bakit ako hindi? My life always has to be put on hold. And seriously I felt so old -- every possibility slipping past me.

I was experiencing such strong incidents of nausea and dizziness early on that during our SM Menswear PFW Show I was already struggling. This turned out to be my last stint. Later on it just got worse. I couldn't keep anything down.  I was stick thin! My skin was so dry it was flaking. My hair was a mess and I felt like I was going bald with the handful that was falling off my head. NO. I didn't have that glow that pregnant women supposedly have.

My pregnancy symptoms were turned on maximum level cause as it turned out - SURPRISE! SURPRISE! I was having twins. Yes I have T.W.O. two persons growing in me! At first I was so scared for myself (early on you are still a bit selfish). I mean how will my frame handle two babies??! I am so tiny! And then everything else dawned on me - waah everything will be times two. ANG MAHAL (so expensive) !!! Anxiety was creeping in. And I really cannot do anything to brush my worries aside - being stuck in bed and all. However everyone reminded me what a blessing this is. Oo nga naman. It was a plus that the twins will be born year of the dragon too. They were telling me for sure they will bring me swerte (luck). After much contemplation and prayer I finally felt peace. I even entertained the thought of how cute to dress them up in complimentary outfits (not too matchy matchy). Especially once we found out we were having girls, I couldn't contain myself anymore!!!
I had a short respite around Christmas time. The pregnancy symptoms that visited me during the first trimester lessened in strength (though it never left). I rewarded myself with a few short trips out and was actually able to buy gifts for fam, attend a Christmas party and celebrate my sis and mom's birthday and  of course Christmas. It was short lived though. By January I was told I needed to be put on bed rest. But hard headed me even asked if I could attend my cousin's wedding that afternoon! Doc gave me a thumbs up so I went. Two weeks later after resting and medications my contractions still did not stop. I was told I have to be admitted in the hospital already.

It was the scariest time for me... I mean we were warned that we had to watch my pregnancy closely in case of complications and I lose my babies. But hearing that I actually have to go to the hospital scared me shitless. It felt like it can really happened. I was crying as I was packing. Later on I realised I wasn't even allowed to pack my own bag at all. I stayed for 5 days and was released given the instructions that I was only allowed to leave my bed to go to the bathroom and for very very quick showers that I can take sitting down. I do not know how I survived those months. I drew my strength from my family and every well wisher.

It was a trying time. My mind has gone to its darkest corners of misery and frustration. So every time I entered that space I reminded myself of the profound love I have for my babies. It had seemed that I had to give up a lot for this pregnancy that again took me by surprise. It didn't help that I literally cannot accomplish anything. What helped me really was the memory of me in the hospital and that intense fear of the danger my babies were in. I remembered how they had to monitor the heartbeats of the babies every so often and the relief I felt every time I heard them BOTH. I held on to the memory of gratefulness I felt every time the doctors assured me that the babies are really strong and doing well. The scare actually was a turning point for me. That was the time I have grown to accept my fate completely. That I was ok with this. This is not bad. It is actually, GREAT, A MIRACLE even.

I was often reminded by my doctor of the dangers we were in. The scenarios we have to be ready for. One of those would be the twins coming out early and having to be put in the incubator. Not only would this be emotionally draining but financially as well. That is why we were so grateful when I reached the 37 week mark! This is the usual time when multiples arrive. I actually even went beyond and reached 39 weeks!!!
The birth went smoothly.

Every day I look at my babies and still a lil bit scared to believe that I am this lucky...
But I am. Indeed I am.

thanks for the love!

KNOW ME. LOVE ME.